What Do I Plant When?

Tips on the Tiller

Under Construction: The Rain Garden and Bog 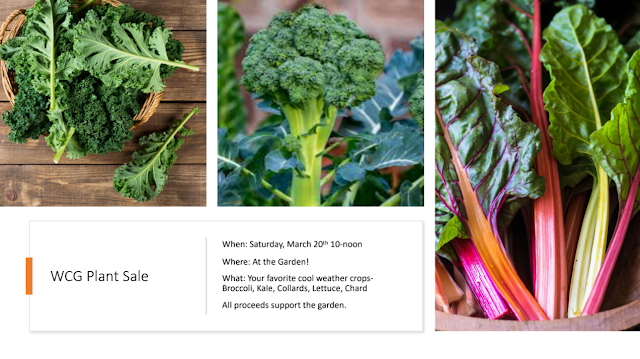 Attention all gardeners- spring has sprung and we have some perfect plants for you to put in your gardens now!  Please join us at the Plant Sale this coming Saturday (3/20) from 10 to noon to purchase collards, kale, chard, lettuce, and broccoli!  They're $3 for 6-packs and $2 for 4-packs.  Hope to see you Saturday morning!!

What Do I Plant When?

All the transplants and seeds recommended for planting in February can continue to  be planted in March (see Newsletter, below). Between April 5- April 15 or when you believe the last killing frost will come, you can begin planting:

You can spread the harvest out if you plant a second crop of beans about 2-3 weeks after the first. Planting 2 rows of bush beans close together helps them to support each other and grow tall.

Peas should be planted before April as they do not like hot weather.

After April 15 you can begin planting Okra seeds, pumpkin seeds, and watermelon seeds.

Tips for Using the Tiller

Williamsburg Community Grows is the proud owner of a brave little vintage Sears 5hp gas-powered rototiller. It was purchased in 1994 and has faithfully worked vegetable gardens in Illinois and Northern Virginia before its owner moved to a nearby over-55 community with a very active and vigilant HOA. So the tiller came to live with the Community Garden and all you Gardeners are welcome to use it in your plots.

Volunteer Robert Reining was kind enough to overhaul it this spring so it runs really well at present.

To use the tiller:


It is important not to overwork the soil or to till the soil when it is wet!!! This can ruin the structure of your soil by pulverizing it into tiny particles or turning it into clumps, respectively. Only go over each part of your soil one time with the tiller. If it has rained recently, squeeze a handful of soil before you start and if it sticks together in your palm when released, the soil is too wet.

Our rototiller is a great tool to help you break up the soil and turn in amendments like compost or leaves. Please be kind to it - it is a senior citizen!

Under Construction - The Rain Garden/Bog

You may have noticed the construction going on near the front fence line. In an effort to collect and use excess water in that part of the garden a team of volunteers has created a rain garden. 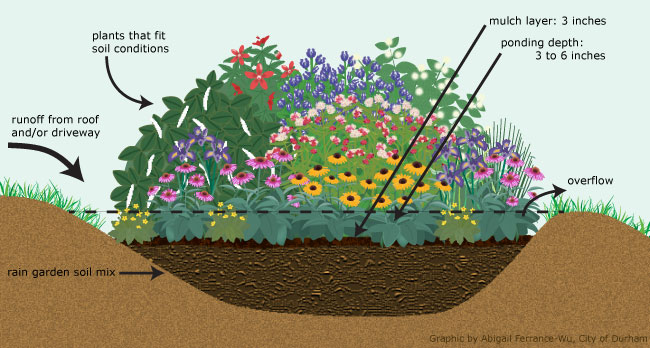 What is a Rain Garden?

Rain Gardens  can be a part of your landscape design and can help you to better manage stormwater on your property.

In our situation, there is a mostly impervious layer underneath our rain garden that makes it difficult for the water to infiltrate. As a solution, a catch basin has been created which can pump the accumulated, filtered water to a nearby cistern. The pump is powered by a solar panel. This arrangement allows use of the excess water to irrigate the garden. Drain tiles have also been installed on either side of the rain garden to help pull excess moisture away from the new plots near the fence.

Volunteer Robert Reining is also adding a water feature which will drain into a bog area. This area will be planted with water-loving plants and will provide a visual and sound aesthetic to the rain garden.

As it gets closer to planting time in the rain garden, we will publish a list of the plants we are looking for to request donations of divisions from any of your home gardens. 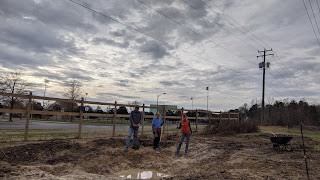 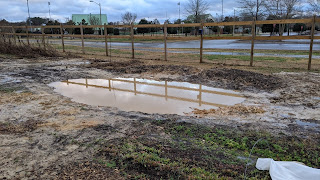 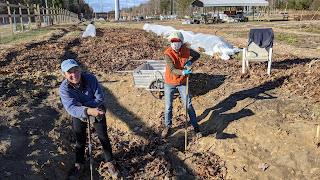 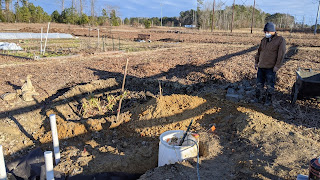 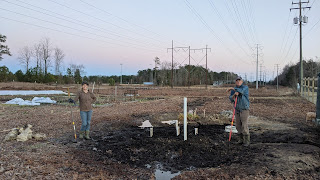 Liz and Charlie after filling in excavated site with bioretention mix-- sand, compost and topsoil.

However you pronounce it, there are a number or varieties out there which include those for slicing, those for making tomato sauce and paste, i.e. Roma, and those little cherry types for snacking.  And then there is determinate, indeterminate and semi-determinate.  Until last year I never realized there was such a thing as a determinate tomato and probably, had I heard the term, would have thought that was a plant that was “determined” to grow whatever the weather threw at it.  And were you aware the tomato is a fruit?

·         These are also called “bush” tomatoes and because they are smaller than other varieties they can be planted closer together.  These plants produce one crop then very little thereafter.  If you plant this type and want tomatoes throughout the season, they should be planted successively. Examples would be Early Girl and Celebrity. Even though they are “bush” tomatoes, they do benefit from being in a cage. Do not “sucker” this variety.  Suckers are branches that start to grow between the main and another branch. This is a good canning tomato because it produces fruit all at once plus they are good for container gardening. Some types of cherry tomatoes are also determinate varieties.

·         These are also called “vining” and require being staked or caged.  They can grow to 6 feet or taller.  They produce fruit throughout the season so you can have blossoms, green and ripe tomatoes all at one time. They benefit from having suckers removed. They continue to produce until frost.  An example of this type would be the Beefsteak which is a big, juicy slicing tomato. There are indeterminate varieties of cherry tomatoes also.

·         These varieties are more compact than indeterminate tomato plants but do benefit from being caged.  They produce fruit throughout the season.  It is suggested to keep 3 main stems and do not remove suckers from them. Burpee Seed catalog offers the Atlas Hybrid which is described as having “1 lb. tomatoes with unsurpassed balance of sweetness and acidity” and can be grown in patio tubs or barrels.  It is described as a “slicer”.

We hear about and see “Heirloom” tomatoes in the grocery stores.  But what exactly is an Heirloom?  Traditionally the term was applied to a variety whose seeds were passed down through generations in a family.  Now that the term is popular, there are different definitions.  Two tomato experts, Craig LeHouttier and Carolyn Male at TomatoFest Garden Seeds coined the following definitions:

·         Family Heirlooms: Seeds that have been passed down for several generations through a family.

·         Created Heirlooms: Crossing two known parents (either two heirlooms or an heirloom and a hybrid) and dehybridizing the seeds until the desired characteristics are developed which can take as many as eight years or more.

·         Mystery Heirlooms: These are varieties that are a product of or natural cross-pollinated of other heirloom varieties.

Good news:  The garden will have a family heirloom tomato, the Uncle Joe, available for sale at the warm weather plant sale.

Our first season at the garden was a time of great joy being outdoors, working with plants, getting dirt under our nails, and having great hopes of beautiful and abundant crops of vegetables and flowers to share with neighbors and friends.  Our zinnias were beautiful and kept our houses filled with flowers.  The beans had bunny problems and, hopefully, our tomato crop will be more productive this year than it was last year.  Darlene and I had 10 or 12 plants and we were almost overwhelmed wondering what we would do with all the tomatoes we would pick.  Well, we had enough for our sandwiches and salads but my “preserving” amounted to about one pint of tomatoes.

So, we are looking forward to another year at the garden and can’t wait to get that dirt under our fingernails.  Happy gardening to everyone.

People in the Garden 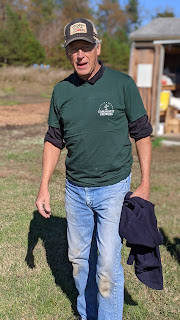 Meet Charlie Morse, Charlie is the Executive Director of Williamsburg Community Growers (WCG). While this sounds like an honorary, administrative position, those of you who have seen Charlie working tirelessly around the garden know he is very much hands-on. Officially, he is responsible for the Community Garden, the Teaching/Urban Farm, and the Food Access Team which is responsible for connecting the WCG farm and garden and locally grown produce to our greater community with our food donations. Unofficially, he puts in our irrigation system and makes sure the cisterns are full, runs power and water for the greenhouse, drives the tractor, helped build the rain garden, sources supplies, built the berry garden, puts up fences, traps rodents, and does anything else that needs to be done. Here is how Charlie describes his coming to WCG:

In 2010 I helped start a school garden at Blayton Elementary School. I was the technology teacher and ran a computer lab for all K-5 students. Since it was a windowless lab, starting a garden was a welcome opportunity for me to get outside.

When I saw how the kids responded to working in the garden I realized what a great learning space it could be. I also discovered how much fun it was to grow things. Further, I realized how out of touch many kids are with the natural world. This was made clear one day when a group of second graders were helping to harvest. A boy pulled a carrot out of the ground and said in amazement "This looks just like a carrot!" And when the cafeteria manager made sweet potato pies from the fall harvest for the whole school, there was no turning back!

In 2015 I retired from teaching, and when Williamsburg Community Growers was being formed it was an easy decision for me to get involved. I had gained some skills in developing irrigation systems in concert with solar power and thought it would be fun to build another garden from the ground up. It also allowed me to continue the important work of showing young people where their food comes from.

Thanks to all the folks who have pitched in and have helped make the garden and farm a success. I'm looking forward to many more years of growing! 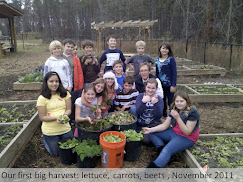 Our New Volunteer Sign Up Link :   https://www.givepulse.com/group/events/482301 if you want to sign up for volunteer spots on Tuesday afternoons or Saturday mornings.

Farm Stand and CSA (Community Supported Agriculture): To bring a bit of financial stability to WCG, last year we opened our Farm Stand (open 9 - 11 am Saturday mornings, once we have produce to pick). The Farm Stand will be open Saturday, March 20 for our Plant Sale.

This year we are also running a small CSA subscription farm, with 10 Sustaining WCG Members whose donations will support the garden. CSA Members will receive a weekly bag of veggies from May 22 to September 23 in thanks. Let us know if you or anyone you know would like to join!

Fall is finally here at the Garden. The weather has been cooler and we have had some nice rains. Many of you have planted fall crops, like...